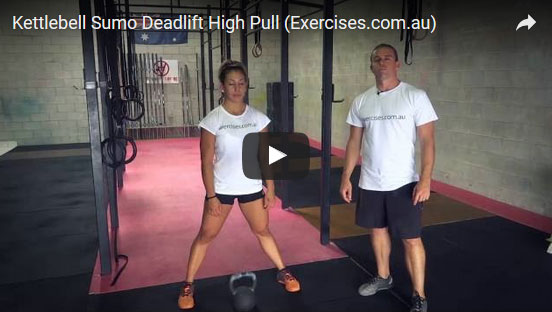 It also engages the core muscles to stabilise the upper body and support the lower back.

This exercise can be used as part of an interval program designed to develop conditioning.

The first common fault on the Kettlebell Sumo Deadlift High Pull is starting the exercise with a rounded back. This places tremendous strain on the lower back area.

Another common fault is locking out or straightening the legs on the initial pull.

This may compromise your lower back, strain your hamstrings and slow down the speed of the exercise.

Finally, using muscle strength to bring the weight up can injure your lower back, shoulders and elbows. It will also reduce the speed of the exercise.

How To Do Kettlebell Sumo Deadlift High Pull

Search For An Exercise…

How To Build Muscle [Guide]

How To Lose Weight [Guide]

How To Strength Training [Guide]

How To Eat Healthy [Guide]

How To Tone Up [Guide]

EVERYTHING About Exercise [Guide]

EVERYTHING About Cardio [Guide]